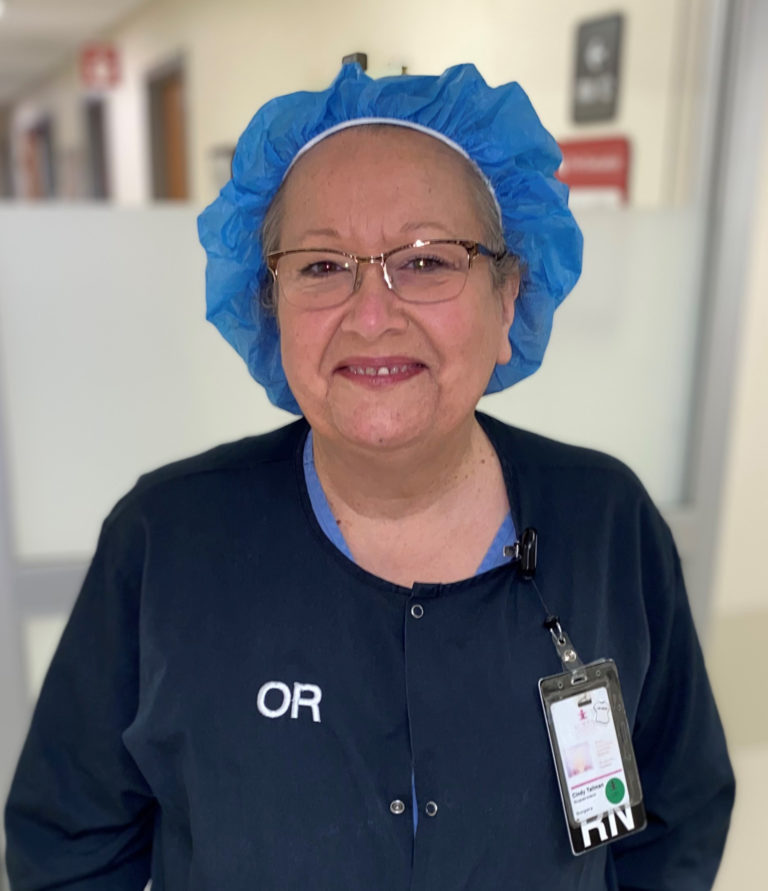 January 10, 2022 – Cindy Tallman, of Morris, has been making an impact on patient care at Morris Hospital for over 43 years. From licensed practical nurse, to registered nurse, to surgical services supervisor, Tallman’s calm demeanor, positive attitude, stellar work ethic, and compassion for others make her a stand out, role model employee. She was recently honored as Morris Hospital’s Fire Starter of the Month for December.

Tallman credits her mother, the late Lillian Marshall, with setting the stage early on for her career. When she was a child, it wasn’t unusual to receive birthday or Christmas gifts from her mother that were associated with medicine in some way, whether it was a toy doctor’s bag or a visible woman anatomy kit. When her cat ran away, her mother told her he went to “nurses’ training.” And when Tallman was just 6 or 7years old and her grandfather was dying of cancer, her mom told her, “You’re going to be his nurse.”

“My mother always wanted to be a nurse herself,” says Tallman. “I think she programmed me in that direction.”

Tallman had her first experience with Morris Hospital as a 13-year-old volunteer candy striper where she spent hours filling patients’ water pitchers. In 1979, she took her first official position with Morris Hospital as a licensed practical nurse on the midnight shift. Just 18 months later when a scrub nurse position, Tallman made the transfer to the Surgery department, and that is where she has remained ever since. After getting her RN degree, she was able to circulate in the operating room and was eventually was promoted to Charge RN and then Supervisor in 2013.

“Cindy is definitely a constant in the Surgery department,” says Linda Wiesbrook, Director of Surgical Services at Morris Hospital. “With 40 plus years of OR experience, she’s very knowledge and a great resource for the staff and physicians. She has a very approachable personality, is easy to talk to, and compassionate about her work, patients and teammates. She’s very loyal to the organization and to all of us.”

Employees in the Surgery department who nominated Tallman for Fire Starter of the Month concur that her dedication to the department and hospital is “undeniable.”

“Cindy has handled the challenges that COVID has brought with such grace,” states the nomination form that was submitted by the Surgery Department. “She is the type of supervisor who truly cares about the happiness of the staff on a personal and professional level. Not only did she take on extra responsibility as a supervisor, she also helps scrub and first assist when there are staffing shortages. We can confidently say that this department would not be the same without her.”

“My mother always told me to follow the Golden Rule. I’ve tried to live by that,” says Tallman.

After being selected Fire Starter, Tallman got an emotional congratulatory phone call from one of her mom’s friends who said, “Your mother would be so proud of you.” Indeed she would.

In early civilizations, fire starters were individuals who had the important job of keeping the flame alive. With over 1,400 employees, Morris Hospital & Healthcare Centers is the largest employer in Grundy County.

Fire Starter of the Month Committed to Helping Others