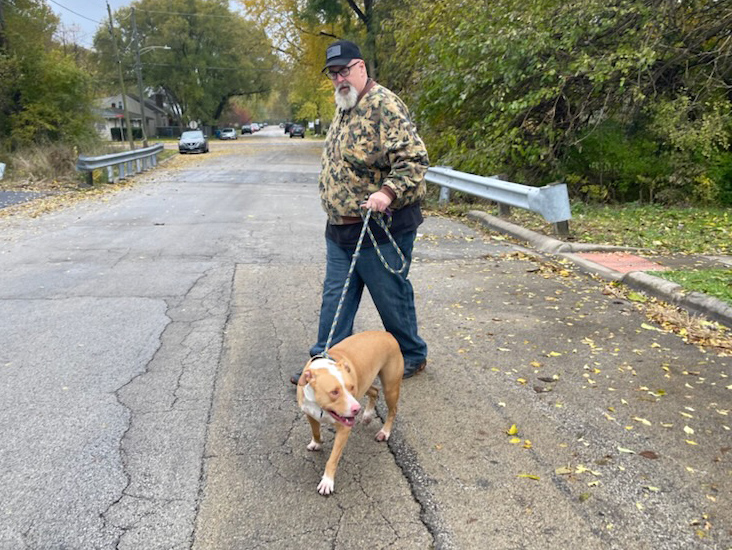 Chuck Phillips will never regret the years he spent playing sports as a youth. A former high school football, basketball, and baseball athlete, he even went on to play some college basketball. Yet, the multiple knee injuries he experienced as a teen, coupled with weight gain as an adult, eventually took a toll on Chuck physically.

“I started walking bent-kneed, and that went on for about 10 years,” explains the 54-year-old Bradley resident who sought treatment from an orthopedic specialist years ago but was too young to be considered for knee replacement surgery. “Walking and standing in one place became painful. It was actually quite excruciating. The pain was so bad, I would break out in a sweat, and that’s miserable. I’m a mechanic, and it was getting to where I could hardly get into a kneeling position or get up from kneeling. I felt like I was going to become crippled if I didn’t do something to get it resolved.”

In November 2020, Chuck consulted with Dr. Keith Rezin, an orthopedic surgeon with Morris Hospital Orthopedics & Sports Medicine, and wasn’t surprised to learn that both knees needed to be replaced.

On March 11, just three days after having his left knee replacement surgery at Morris Hospital, Chuck was back at the DRC having his first post-surgery physical therapy session. It wasn’t easy – especially the first two weeks post-op – but Chuck was determined to do all that the therapists asked of him.

“To be honest, the first two weeks after surgery were miserable,” Chuck recalls. “But after they took the staples out, I immediately started getting better and knew I had to get the other knee done too.  The old knee and the new knee were like night and day.”

Chuck faithfully reported for physical therapy three times a week until his right knee replacement surgery on June 7.  Just three days after the second surgery, he returned to physical therapy. Two months later, he went back to work.

“I did try to do the best I could because I wanted to get the most out of therapy,” says Chuck. “The physical therapists at Morris Hospital are excellent. They’re just great people. They keep you motivated and challenged every time you go. Each session was always different. They also taught me exercises to do at home, and I still do some in the morning and evening.”

While Chuck continues to heal and get stronger every day, he says his quality of life is so much better today than it was before the knee surgeries and therapy.

“I’m way more active today than I was then,” says Chuck. “I can stand and walk without excruciating pain. I don’t have to worry anymore about being in situations where I have to stand. I’ve prolonged my career by at least 10 years.”