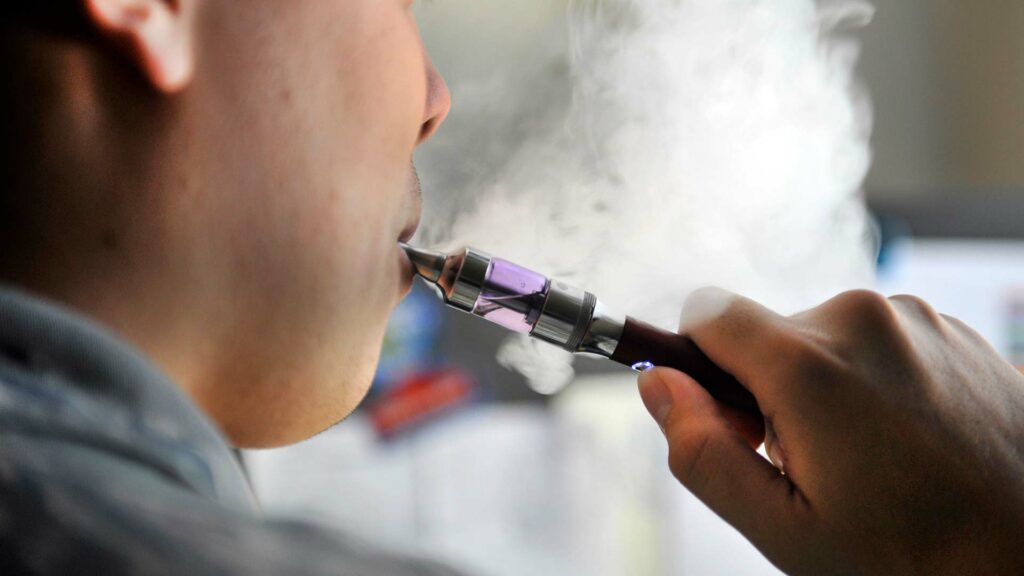 Although e-cigarettes have been around for about a decade, their use among teens is escalating with new delivery systems that are easy to conceal and virtually vaporless. Teens at local high schools are even “vaping” in school classrooms and at sporting events with school officials unaware.

The growing epidemic is problematic, with a 2017 survey published by the Centers for Disease Control (CDC) indicating 42% of teens have used an electronic vapor product. Comparatively, 29% of teens reported having ever tried a cigarette.

So what exactly is “vaping?”

According to the CDC, vapes and e-cigarettes are interchangeable terms used to describe devices that produce an aerosol by heating a liquid that usually contains nicotine. Users inhale the aerosol into their lungs to simulate the feeling of smoking.

While some of the devices that are used to vape look like regular cigarettes, cigars or pipes, others look like pens, flash drives and other everyday items, making it easy to disguise them.

Vaping is sometimes referred to as “JUULing,” after the brand of one of the devices. Along with vapes and e-cigarettes, the devices are also called vaporizers, vape pens, hookah pens, and e-pipes. The technical name is electronic nicotine delivery systems, or ENDS.

Offered in cookie, candy and fruit flavors, their attractiveness to teenagers is worrisome to health care professionals, as the vapor inhaled has been linked to cancer, respiratory disease and heart disease.

Vaping and the developing teen brain

Dr. Melissa Hill, a pediatrician at the Morris Hospital Ottawa Campus, says she believes many young people don’t understand the dangers of e-cigarettes.

“Teens may not realize vaping is harmful to them,” says Dr. Hill. “The nicotine in some of the cartridges is pretty concentrated, and one pod can contain as much as an entire package of traditional cigarettes. Nicotine is highly addictive, and the adolescent brain is highly susceptible to addiction.”

According to the CDC, nicotine can harm adolescent brain development, which continues into the early to mid-20s. The parts of the brain that control attention, learning, mood and impulse control are especially at risk.

“Not only is there nicotine in vaping systems,” Dr Hill says, “but there are a lot of chemicals. The vapor also consists of chemicals that can cause cancer. Metals from the coils that heat the solution can also be inhaled.”

According to the U.S. Surgeon General, vapor from e-cigarettes can contain:

Talk to your kids

While many adults successfully use e-cigarettes and vaping devices as a first step to quit smoking, for teens, the habit can be an on-ramp to a lifelong addition rather than an off-ramp.

“Due to the addictive nature of nicotine, vaping can start our kids along a path of unhealthy behaviors,” Dr. Hill says. “The more they vape, the more hooked they become.”

To prevent that from happening, Dr. Hill recommends parents familiarize themselves with vaping systems and health risks and then talk to their children.

“Talk to your kids, just as you would talk to them about not smoking cigarettes and not drinking alcohol,” she says. “Talk to them about the reasons why it’s important not to try these vaping systems.”

Parents should also be aware of what their teens are purchasing on the internet, as online stores don’t always ask for proof of age.

Dr. Hill also cautions about having vaping cartridges in a home where young children are present. If accidentally ingested, the ingredients can cause seizures, respiratory failure or death in young children.

Do You Have a Primary Care Provider?

Morris Hospital CNA Puts Well Being of Others First

Slowing the Spread of COVID-19: We All Have to Do Our Part