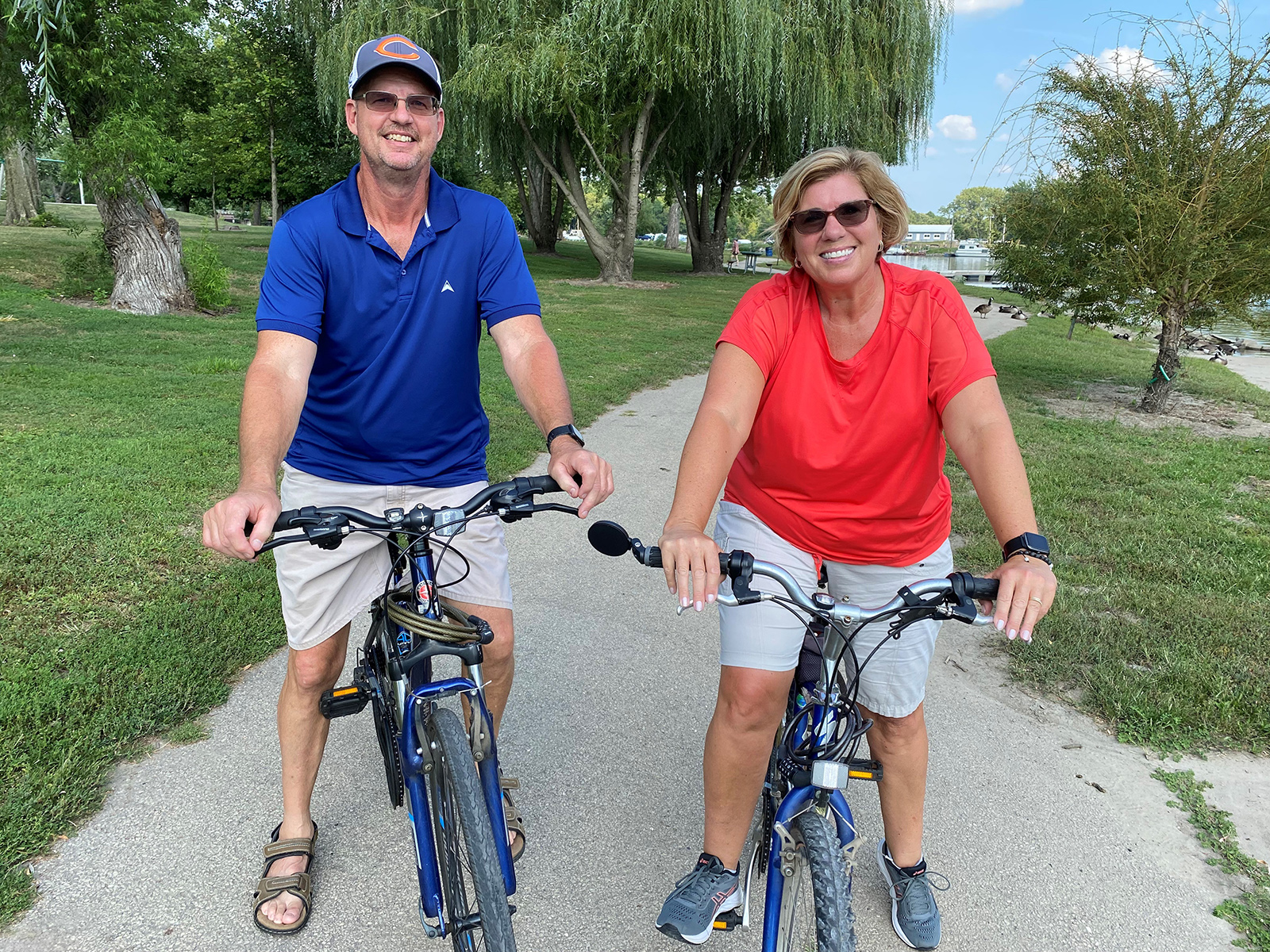 As Craig and Beth Walsh reflect on their journey since Craig’s heart disease diagnosis, there are two things they want everyone to know. First, go see a doctor if you suspect something’s not right with your health. Second, if you need heart care, Morris Hospital is the place to go.

“I was tired, and my blood pressure was low,” says Craig, 59, who works in the factory at Mitsubishi Belting Limited in Ottawa. “There were a few times I was doing something active and didn’t feel right. I felt like I was going to pass out.”

Beth had also made some unsettling observations about Craig’s health.

“I had been concerned for a while,” admits Beth, sharing that two of her brothers died suddenly from heart attacks, one at the age of 50 and the other at 55. “Years ago, Craig wore a 30-day heart monitor and while it showed a little glitch with his heart, it wasn’t enough to do anything about it. Since then, he has been diagnosed with sleep apnea and uses a CPAP machine. More recently, I was getting nervous because he was super, super tired, and that’s not like him. He looked really worn down at night and his coloring was off. He almost looked gray. I said ‘Craig, that’s not right.’”

After having an echocardiogram and stress test ordered by Dr. Said, Craig had an angiogram last February, a diagnostic test performed in the Cath Lab at Morris Hospital that uses x-ray imaging to take pictures of the heart’s blood vessels. The angiogram likely saved Craig’s life.

“While there really weren’t any big red flags with the echo and stress test, they did see something they wanted to look into further,” Beth says. “I don’t think anyone was expecting what they found in the angiogram.”

The angiogram revealed a 90% blockage in the left anterior descending (LAD) artery, a particularly dangerous location for a blockage since the LAD serves such a big portion of the heart. This is the artery that is commonly referred to as the “widow maker.”

While a 90% blockage wasn’t the news they were hoping for, Dr. Saeed was able to immediately perform an angioplasty and insert a stent, a tiny wire mesh that’s left inside the artery to keep the blood flow open.

“Everyone in the Cath Lab was super,” says Beth. “Dr. Saeed even showed me pictures of the artery on his phone when he came out of the procedure. He was just wonderful. We can’t say enough about the hospital and care. Just the fact that they can do the procedure right there and get it done as soon as they found out there was a problem … I can’t image the stress that comes with doing it any other way. We tell everybody we know that if you need something for your heart, go to Morris Hospital. It was the best place we felt we could be.”

While Craig is feeling better today, Beth says it was a life changing experience for the couple.

“The biggest thing that we keep preaching to our friends is that you have to keep going at it if you’re concerned that you might have a medical issue,” says Beth. “If you think something is wrong, you have to be proactive and keep pursuing.”

“If you’re not feeling right, get to the doctor and get things checked out,” adds Craig, whose story has inspired a number of family and friends to make medical appointments that they had been putting off. “Listen to your body. You need to take care of yourself.”

The Cath Lab at Morris Hospital is where advanced cardiovascular diagnostic testing and interventional procedures are performed, such as coronary and peripheral angiography, angioplasty, stenting, pacemaker and defibrillator implantations, along with interventional radiology special procedures. It’s an advanced capability that’s not typical for a hospital the size of Morris.

The availability of a Cath Lab is most critically important when someone is having a heart attack. At Morris Hospital, an interventional cardiologist and Cath Lab staff are on call 24/7 and ready to intervene within 30 minutes. Door-to-balloon is defined as the time it takes from the minute the patient arrives in the emergency room to the time the patient is in the Cath Lab and the blockage is open. The average door-to-balloon time at Morris Hospital is just 67 minutes, considerably better than the national benchmark of 90 minutes.

Morris Hospital Steps Up Restrictions in Response to COVID-19